The NHS’ big conference of the year took place in Liverpool last week. Lyn Whitfield reports on what the keynote sessions had to say about recovery and reform, and what the expo’s digital zones had to offer to get healthcare from one to the other.

At NHS Confed Expo in Liverpool, the keynote speakers didn’t sugar-coat the problems. NHS England chief executive Amanda Pritchard opened her speech to the NHS Confederation’s annual conference by reflecting on the start of her career 25 years ago.

Then as now, the future of the NHS was being questioned. Decades of under-investment and tinkering with the internal market had led to long waiting lists, deteriorating facilities, and poor outcomes.

New Labour responded with The NHS Plan in 2000, which, Pritchard argued, contained a lot of ideas that are still relevant today – integrated care, proactive care, investment in new technology.

“We have done a lot [in those areas] but we have a lot further to go,” she said. “And it is that constant drive that defines the NHS; it is always striving to do better in the future.”

NHS funding back as a political issue

Long term observers of the NHS would argue that New Labour’s decision to raise UK healthcare funding to European levels did as much to “save” the NHS as its reforms.

But following the “whatever it costs” cash injections to tackle Covid-19, funding for the NHS is in short supply (and health and care face a very much tougher staffing situation than they did in the booming, EU migration friendly noughties).

This year, the NHS is working with the last year of the settlement agreed following the NHS Long Term Plan, even though its costs have risen as a result of the pandemic, it needs to tackle that waiting list, and is facing the same fuel, food, and ‘cost of living crisis’ as the rest of the country.

For the next two years, it will be working with the settlement agreed in last year’s Budget, which was due to deliver real-term funding increases of about 3% a year, before inflation started to rocket (Highland Marketing Budget analysis).

But in his conference address, NHS Confederation chief executive Matthew Taylor said this would need to change. “We can argue about whether last year’s was enough, but what is unarguable is that it is only a first step,” he said (full speech on NHS Confederation website).

“The NHS Confederation will challenge all the political parties to commit to the [average, yearly] real terms increases that the NHS has seen since its inception; [which is about] 4% a year.”

Taylor also urged politicians to support the NHS, as it came under increasing attack from right-wing think-tanks and media outlets focused on its current challenges, rather than on the “bright future” that he argued could be delivered by the latest round of reforms, focused on integrated care systems, joined-up, personalised care, and tackling inequalities.

Everybody wants reform: but what reform?

Taylor was speaking after health and social care secretary Sajid Javid, who had already rejected his call for additional funding (full speech on Department of Health and Social Care website).

Javid said the NHS accounts for 44% of government spending as it is, and it cannot be allowed to go over 50% because this would be “unsustainable” and eat into the prosperity of younger people.

Instead, he said the NHS needed to focus on prevention, to reduce demand, and on increasing productivity, by learning from business. What multi-national, he asked, would operate without a leadership development programme? What FTSE 100 company would put technology outside its core operation?

Javid also spent some time reflecting on his interpretation of the Messenger review (GOV.uk) of NHS leadership that was published the week before the conference. He said the NHS needed more diverse leadership, that could tackle the racism and bullying identified in the report, and in a BMA survey (BMA media centre).

He also argued that it should be easier for “top talent” to take on “the hardest jobs” in the NHS and that trusts that were underperforming should become part of what he called “transformation partnerships” that could spread learning from more successful organisations.

Javid argued that provider collaboratives are already showing what can be done. But the tone of his comments, particularly in interviews with Conservative-friendly papers (The Times, £), have some managers worried that he’s more likely to blame than support them as the going gets tougher (Health Service Journal, £).

Although she spoke first, Pritchard, in effect, had to try to straddle the two sides of this undeclared jockeying for public opinion. So, on the one hand, she had a soothing riff about how “it is because we are the NHS” that healthcare has been able to weather the pandemic, remove the very longest waiters from the list on target (NHS England media release), and plan for the future.

And she had a supportive paragraph on how much less the NHS spends on administration than healthcare services in France or the US (which spends double per transaction, for the same or worse outcomes).

While, on the other, she had to tacitly acknowledge that ICSs and trusts will be expected to hit break-even targets that many think are unachievable (HSJ, £), state that ambulance handover and A&E delays are “unacceptable”, but admit the NHS is on its own this winter, because there won’t be much extra capacity or further social care reform to improve flow.

Reform, to bring ICSs on stream and then make sure they are “making the most of the opportunities provided by data and technology” to deliver efficient care, improve access, and identify and tackle inequalities.

Resilience, to make sure the NHS can secure the staff and skills it needs for the next ten to 15-years, and address capacity through a combination of traditional and virtual wards. Respect, for staff, patients, communities and taxpayers.

Use crisis as an opportunity… to tackle inequality

Away from the main auditorium, there was less focus on the immediate challenges facing the NHS, and more on the potential for the ICS reforms. Although there was also concern that the former could consume the latter; as, arguably, has happened in previous strategy rounds.

A panel session on health inequalities asked why NHS England’s latest approach, Core20plus5, would help ICSs to address poor health and poor outcomes that have been known about since the publication of the Black Report in 1980.

Core20plus5 is a model to help ICSs identify the 20% of most deprived individuals in their population, plus any communities that are locally disadvantaged, in order to develop strategies to address five areas in which they are likely to suffer poor health outcomes.

But Bola Owalabi, director – healthcare inequalities – NHS England and Improvement, said it was only a start. “It is a blueprint,” she said. “It is not all of inequality; but one of the problems with the Black Report was that it tried to do everything, and didn’t get anywhere, while Core20plus5 provides a focus for ICSs to do something.”

She also argued that the current crisis may be an opportunity. “ICSs need to see tackling health inequalities as a priority, because health inequalities are the fuel feeding the pressure on emergency care and primary care,” she argued. “If we don’t start taking the fuel out of these fires, we’re always going to be firefighting.”

A similar message came through from a session on what the NHS needs to do to meet its ambitious climate change targets which, if met, will see it become the world’s first net zero healthcare system by 2045 (Greener NHS website).

Chair Polly Toynbee pointed out that ministers are currently rowing back on commitments to tackle inequalities, such as action to restrict the advertising of food high in salt, fat and sugar, and to tackle climate change, such as fixing fuel duty, on the grounds of the ‘cost of living crisis’.

As an example, Kingdom told a story about a colleague who had prioritised her waiting list and called a family in for a review of their child’s health – only to discover that they couldn’t afford to travel into her clinic.

Using some of the ideas that had worked well, and reduced carbon, during the Covid-19 pandemic, such as virtual clinics and remote monitoring, could address both climate and the kind of unequal access that is being driven by rising prices.

More generally, the climate change panel argued that net zero is a good way to drive change, because it inspires clinicians to tackle waste and adopt new ways of working. But it had some tough messages for the NHS’ 80,000 suppliers.

Nick Watts, chief sustainability officer at NHS England and Improvement, pointed out that as of March, the NHS is assessing 10% of contract value on social and climate change initiatives; and that will grow until, in March 2027, the service won’t do business with companies that haven’t properly measured their carbon footprint and drawn up a plan to tackle it.

That, of course, includes health tech companies, whose data centre and support operations can have significant climate impacts. And, Watts said, offsetting is not going to cut it for much longer.

With this caveat, however, NHS Confed Expo was shot through with ideas for how healthcare technology could support the NHS and help to deliver that “bright future” that Taylor talked about.

The big data and analytics companies had spent big on sponsorship, with Palantir much in evidence talking about the success of the Covid-19 Data Store, its 30-trust initiative to tackle waiting lists, and how it could support ICSs as they come on stream.

While the digital areas of the Expo were dominated by companies offering digital outpatient, virtual ward, remote monitoring, and patient engagement platforms.

If anything was missing, it was the big electronic patient record companies who, perhaps, feel they already have the ear of Tim Ferris, the director of transformation at NHS England, who is pushing to complete the digitisation of hospitals using EPR ‘convergence’ (Highland Marketing analysis).

A panel session right at the end of NHS Confed Expo, agreed more collaboration is the way forward to get these and other systems deployed.

Professor Graham Evans, the executive chief digital officer at North East and North Cumbria Integrated Care Board, said: “We need to be a bit more collaborative, to learn from our neighbours, put out pride to one side, and stop recreating and reinventing the wheel.” The NHS’s current and future challenges are too big and too pressing to do otherwise. 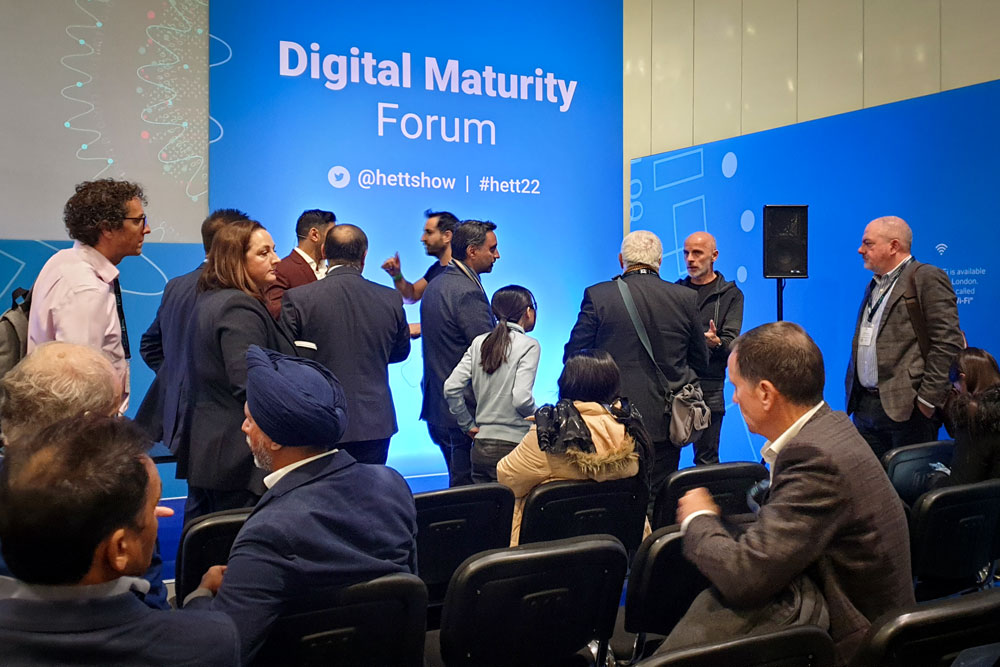