IT’s the end of the year as we know it

Winter, reform and funding rows dominated healthcare news in 2017; a year that also saw a general election and the start of Brexit negotiations. The big IT news of the year was the WannaCry ransomware attack and the expansion of the global digital exemplar programme. Lyn Whitfield looks back over a year of Highland Marketing Healthcare Roundup newsletters. 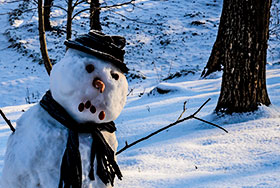 As 2017 opened, 20 hospitals were on ‘black alert’ and the British Red Cross claimed the NHS was facing a ‘humanitarian crisis’ (Guardian). This triggered a row about funding; during which prime minister Theresa May claimed the government had found “more money” for the health service than the Five Year Forward View had asked for.

In a taste of the money wrangles that came to dominate the year, NHS England chief executive Simon Stevens told the public accounts committee this was “stretching it” (Guardian), because the health service’s five-year settlement was not being phased in as the Forward View assumed, and social care funding was not being maintained (HCRU 13 January).

On the IT front, mental health trusts were waiting to hear whether they would be selected to join the global digital exemplar programme. And in another foretaste of things to come, a study by SentinelOne discovered that 30% of NHS trusts had suffered a ransomware attack (press release) (HCRU 20 January). 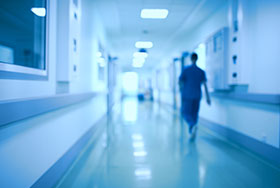 The BBC ran an NHS week, and uncovered a series of problems, including long trolley waits in some A&E departments. Robert Francis, the barrister who investigated the Mid Staffordshire scandal, said the health service was facing an “existential crisis” (Health Service Journal, £).

Health secretary Jeremy Hunt agreed the problems were “completely unacceptable”; but insisted he was “doing this job” because he wanted the NHS to improve (HCRU 10 February). The British Medical Association said the NHS needed more money to deliver the sustainability and transformation plans that were drawn up to deliver the Forward View. The Lords said social care needed more money, full stop, and a long-term, sustainable funding model to boot (HCRU 17 February).

On the subject of STPs, a guide from the King’s Fund underlined their reliance on IT (report), noting that most of the plans identified technology as an ‘enabler’ and wanted better analytics, shared care records, and new digital services for patients. 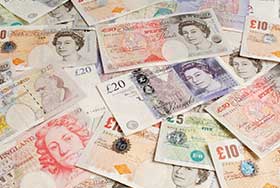 Another King’s Fund report found that the winter crisis had blown a hole in hospital budgets, putting the acute sector on course for a £1 billion end-of-year deficit (Guardian). Later in the month, NHS England was forced to divert money earmarked for mental health and primary care development to plug the gap (HSJ).

Meanwhile, in the spring Budget, chancellor Philip Hammond announced a £2 billion cash injection for adult social care, spread over three years, a green paper on social care, and capital investment for STPs and A&E departments. Think-tanks and medical groups said this would not be enough (HCRU 10 March).

NHS Digital announced that it would take forward another of the Wachter Review’s recommendations, by creating an NHS Digital Academy to train 300 chief information officers and chief clinical information officers. In Scotland, the Scottish government announced that it would create a national portal for health and care services as part of a refresh of its digital strategy (HCRU 24 March). 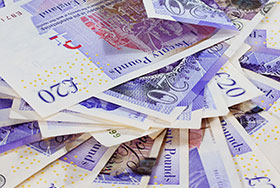 As the NHS started another financial year, NHS England published the ‘Next Steps on the Five Year Forward View’ (NHS England website). This reviewed the October 2014 plan, assessed progress, and set out measures to kick-start change, where this wasn’t happening.

The following week, Sir Robert Naylor published his review of property and estates, and said £10 billion needed to be spent on facilities and technology (gov.uk website). On the IT front, Next Steps announced a revamped NHS Apps Library, improvements to NHS 111 and NHS online services, and four more acute GDEs (HCRU 31 March).

In another taste of things to come, a coalition of health and social care providers urged the government to protect the NHS’ EU workforce, as it triggered Article 50 (HSJ). Then, the government was urged to put health and care “at the forefront of the general election debate” as prime minister Theresa May called a snap poll to strengthen her Brexit negotiating position (HCRU 21 April). 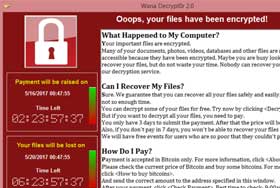 On 12 May, the WannaCry ransomware attack was unleashed (Wikipedia). The crypto-worm targeted computers using the Windows operating system using the EternalBlue vulnerability, locked-up 230,000 computers in 150 countries, and demanded a ransom in Bitcoin to release them.

In the UK, attention focused on the 40 trusts and health boards initially thought to be infected; some of which were forced to put off clinics and close A&E departments as their IT systems went down. Dr Saif Abed, founding partner of Highland Marketing partner AbedGraham, said a “forensic inquiry” was needed into what happened (HCRU 19 May).

As the general election campaign reached its climax, the Conservatives revisited their promise to fund the Forward View by saying they would find an additional £8 billion for the NHS by 2022-23, and increase funding per head of population in every year of this Parliament. Think-tanks said neither this nor the other parties’ pledges would be enough (HCRU 26 May). 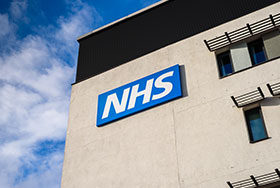 The general election ended in a hung Parliament, from which Theresa May eventually emerged to lead a minority government with the support of the Democratic Unionist Party. Somewhat surprisingly, Jeremy Hunt was then reappointed as health secretary; just in time to attend a notably downbeat NHS Confederation annual conference (HCRU 16 June).

While it was going on, the Health Foundation published a paper estimating that applications from EU nurses had dropped by 96% in the year since the Brexit vote (report); contributing significantly to what was suddenly a workforce crisis (HCRU 23 June).

On the IT front, there were changes at NHS Digital as Sarah Wilkinson prepared to take over from Andy Williams, who resigned as chief executive in March. The National Audit Office announced that it was going to investigate the WannaCry attack, which it described as an “avoidable problem” that many previous reports had addressed (NAO blog post). 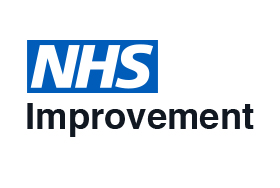 As the summer progressed, the main health unions held their annual conferences. Unison called for an end to the cap on public sector pay, arguing that this would help recruitment and morale. Jim Mackey, the chief executive of NHS Improvement, responded that pay was not the only factor affecting NHS morale; and that any increase would have to be paid for (HCRU 7 July).

The Royal Free NHS Foundation Trust was rapped by the Information Commissioner’s Office for giving Google offshoot DeepMind access to 1.6 million patient records to develop its Streams app; a project that has cast a long shadow over digital health developments (news release).

The following week, the government finally published its response to Dame Fiona Caldicott’s third review of NHS data security and information governance (pdf), promising an overhaul of patient opt-outs, and £21 million to increase cyber-resilience in response to the WannaCry attack (HCRU 14 July). 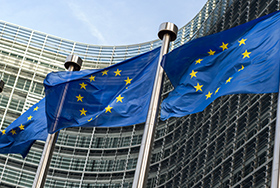 Otherwise, August proved a busy month for NHS IT. Matthew Swindells, NHS England’s director of commissioning, operations and information, gave an interview to the Health Service Journal in which he said the global digital exemplars and their suppliers would be put on a new framework contract so other trusts could buy their services and products (HCRU 4 August). 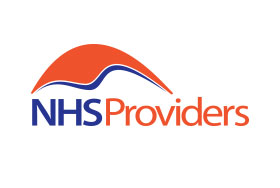 As the autumn kicked in, think-tanks and pressure groups started to think about the next winter crisis. NHS Providers warned that £1 billion that the NHS had been told to divert to social care had not reduced delayed discharges as planned, leaving it short of 2,000 to 3,000 extra beds.

The following week, Jim Mackey confirmed that delayed discharges were, in fact, up (HCRU 8 September). Then, at the Health and Care Expo in Manchester, Simon Stevens warned that a flu epidemic might be on the way. In other Expo news, Jeremy Hunt announced 18 fast followers for the acute GDEs (HCRU 15 September).

NHS England also rebooted its attempts to use patient data for planning and research by outlining plans for regional digital innovation hubs, covering 3-5 million people. Amid all these high-tech plans, Common Time issued a much-covered report suggesting that the NHS is now using one in ten of the world’s pagers; instead of cheaper and better mobile solutions (digitalhealth.net story). 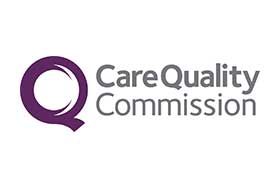 The Care Quality Commission issued its annual State of Care report, warning that a “health and social care system designed for the 20th century” was operating “at full stretch” and that a new model would be needed to cope with 21st century problems (CQC website).

The Department of Health launched its annual flu vaccination campaign, and urged NHS staff to get their jabs. NHS staff were also, apparently, promised a pay rise, when Jeremy Hunt told the House of Commons that the public sector pay cap had been lifted (HCRU 13 October).

In IT news, trusts using CSC’s most up to date system, Lorenzo, were promised their own exemplar programme, using money left over from NPfIT (HSJ, £). The NAO published its report into WannaCry, concluding that 236 trusts and 603 GP practices had been affected by an “unsophisticated attack” that could have been stopped by “basic IT security.” And Keith McNeil called for closed loop e-prescribing at all trusts (HCRU 27 October). 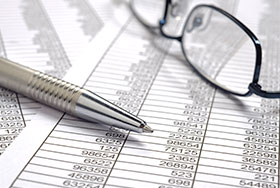 Chancellor Philip Hammond prepared to give his autumn Budget on 22 November. As he did, the near constant hum of debate over NHS funding, performance and reform broke into a cacophony of demands for additional cash for health and social care.

The NHS Confederation organised an open letter making a “last desperate plea” to Hammond for more money next year, while three think-tanks estimated that it would need at least £4 billion next year and more after that to stop waiting lists hitting 5 million.

At the NHS Providers annual conference, Simon Stevens didn’t disagree; adding that voters were expecting to see a down payment on the £350 million promised by the Vote Leave bus for good measure. In the end, Hammond found £350 million for winter pressures, £3.75 billion to top up the next two years of the Forward View, and nothing for social care. Lobbying organisations said this would not be enough (HCRU 10 November, 17 November and 24 November). 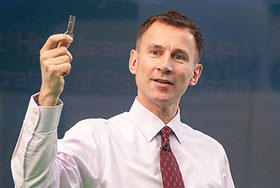 NHS England’s board met, and warned that it could not meet all the demands on it, while staying in budget, for the money made available by Philip Hammond. Jeremy Hunt responded by saying he expected the commissioning board to hit waiting list and time targets (HCRU 1 December).

Hunt also put himself on a collision course with staff, by saying he expected significant changes to the Agenda for Change system in return for a pay increase, and an uptick in productivity. As the winter proper finally got underway, NHS Providers put out a report saying many hospitals were already at 99% capacity. Then, it started to snow…

Advisory board debate: getting digital inclusion onto the health and care agenda

Tech4CV19: the Covid-19 initiative that is looking to the future