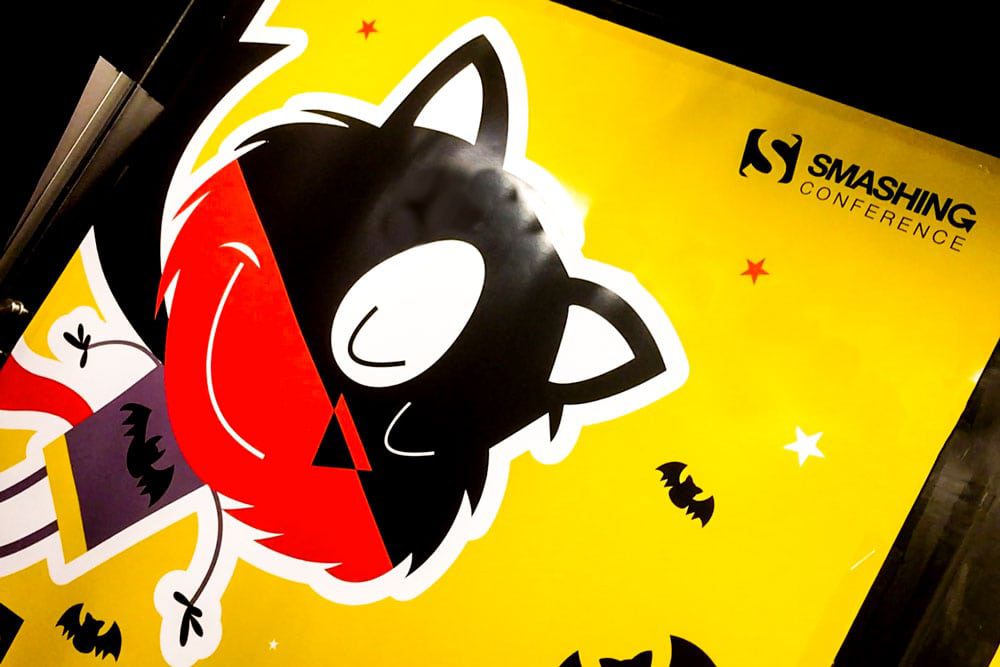 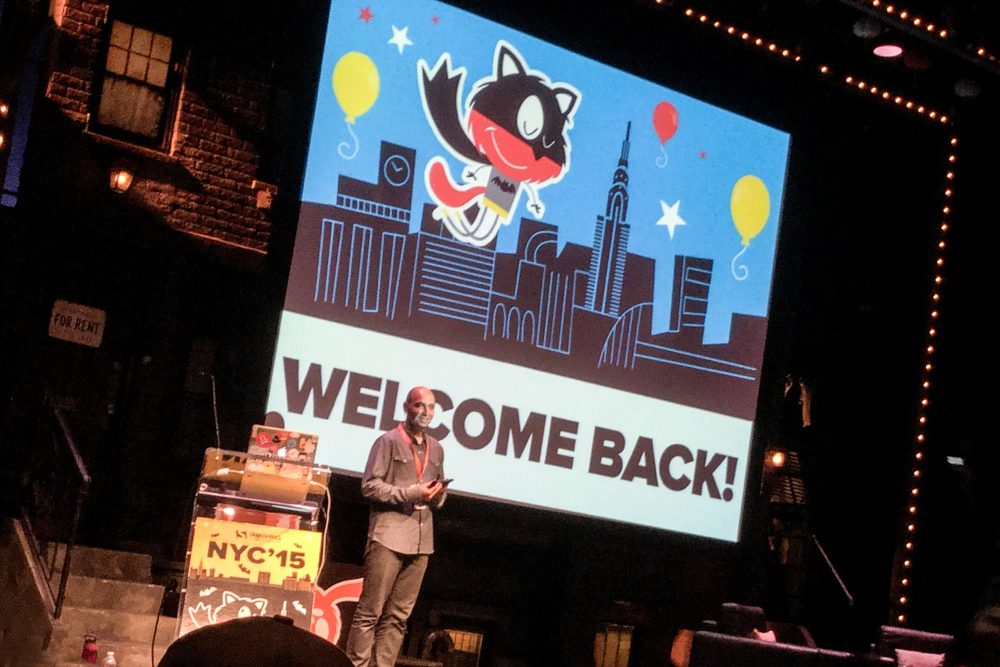 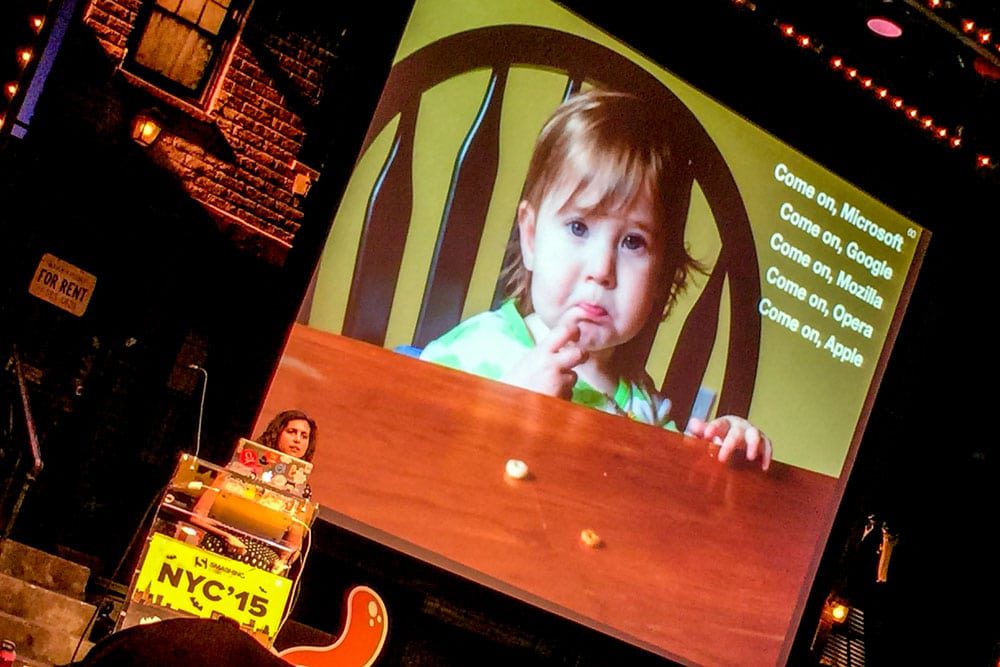 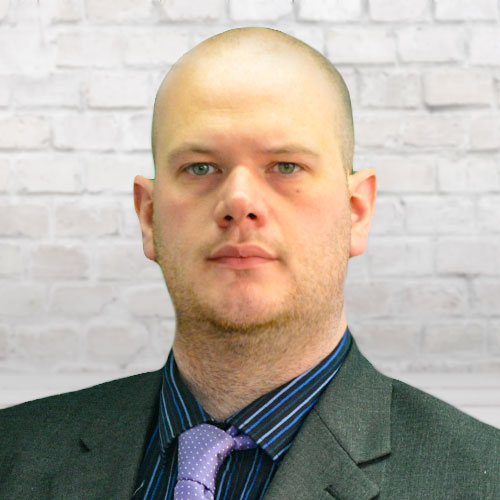 Good is the enemy of great. Complacency is an ever-present danger of the design and development projects becoming just another day job. Inspiration is key and what better way to fuel the fire than to come together as an industry with sharing, discussing and learning as the goal?

Smashing Conference NYC 2015, run by Vitaly Friedman and the Smashing Magazine team, took place in mid-June and nestled sweetly amongst the buzz of Times Square in New York City. A packed auditorium was home to some 400 members of the design and development industry with the stage being set for an array of insightful, knowledgeable and experienced insiders who led the conference through a never ending journey of ‘light bulb moments’.

Christian Heilmann is a brutally honest web evangelist currently part of the Microsoft Edge team (the browser expected to fill the hole left by the now defunct Internet Explorer). In a very engaging talk he said: “As developers and power users of the web, we assume our audience to be as excited, knowledgeable and engaged as we are.” For example, we assume that finding cell A3 in an Excel spreadsheet to be a simple, logical task. Yet why do we find sitting in the correct airplane seat so challenging? How often have we found someone who has utterly failed at finding seat A3?

He expanded on this further with his view on how the web of today could be so much better. For example, the noise to content ratio of web pages has risen as monetisation has taken over lead by aggressive advertising. This was an interesting ‘step back’ approach to the irritations within the web industry as it stands. It may have come a long way, but it could be so much more.

Psychology in websites is a vast and interesting topic that Susan Weinschenk discussed, delving into how our end users subliminally interact with our designs. Drawing from over 30 years of experience as a behavioural psychologist, Susan applied research on brain science to predict, understand, and explain what motivates people and how they behave. The importance of peripheral vision and how we as designers could then exploit this natural instinctive behaviour was an eye opener. By making use of blank whitespace around your webpage by including cues or triggers for your call to action certainly makes sense and is solidified with the weight of scientific research behind it.

I cannot go any further without including the conference’s mystery speaker, revealed as Lea Verou, a frontend developer and an invited expert in the W3C CSS Working Group. CSS is the language used to apply formatting such as fonts, colours and layout to websites, and Lea is a CSS ninja. She proved this by challenging herself to create for the web a common, accepted visual element – a pie chart. A simple component but hideously complex to create for a website, especially when browser compatibility rears its beautiful head.

Lea clearly highlighted the lack of browser support for key CSS features included in current specifications. Creating this pie chart could be vastly reduced to just three lines of code, if only the browser apps supported the language. These limitations can be frustrating for developers – imagine if Microsoft Word didn’t allow you to type with one half of your keyboard, how restrictive would that be for you? Browser support is fundamental to the growth of the web and could even tackle some frustrations described by Heilmann in his earlier talk.

Another valuable part of the conference was having the time and opportunity to interact with fellow workers in the industry, sharing experiences and discussing the pressing topics that face us in our roles. There seems to be a trend in this post-Web 2.0 era where development and design companies are more interested in broad-winged specialists who can take different types of projects in their stride, rather than looking for the diamond in the rough who is white hot at one particular skill. There is a blurring of the lines that separate job roles which Katie Kovalcin covered in her talk, urging designers and developers to work together as one rather than as the separate entities they so often are.

As graduates come through from specific, specialised university courses armed in one hand with a certificate prominently featuring a large green check mark beside ‘UX’, and with a handful of hope clutched in the other, they are immediately challenged as companies have shifted their requirements for open positions. The plethora of splintered job roles that at one time were all the responsibility of the ‘Webmaster’ seem to be converging back together. Experience is the rare attribute our industry is yearning for as it grows ever older, which proves to be a major stumbling block for those who are too young to have experienced the dot-com boom.

Does this dive into the deep world of web have an impact on healthcare companies apart from your public website itself? Absolutely. Take a step back from your solutions to examine the user interface and the user experience. The psychology Susan discussed is as applicable here as it is on your website. How well does your software integrate with others? Does the workflow make assumptions about your end users that would cause irritations? Good is the enemy of great and complacency is an ever-present danger.

Bringing together those in the web development and design trenches, with sharing as a key target, is the ethos I will take away from Smashing Conference. No ranking each other, no right or wrong ideas. We are all in this together and we will be wasting our precious time and energy unless we work towards a common destination. Surely this is an approach that could also apply to healthcare? Trust brings less fear of failure, less fear of taking on large challenges. Failing means you’re learning. This outlook serves to improve our web along with all of us who use it.

Design and Digital Manager
Born and reared in the wild Highlands of bonnie Scotland, Gregor started his working life as a 13‑year‑old “Saturday boy” for a local retailer bagging tatties into 3lb bags. From this strong foothold he decided to follow his heart rather than his “further-education” head and Gregor invested 14 years into the business, growing with it as he grew up himself. As the previous owners stood back into retirement Gregor moved forward and picked up the reins. A normal working day started at midnight leaving for Glasgow Fruit Market, working through the night, morning, afternoon and into the evening. Gregor was involved in every aspect of running a business including development, personnel management and client relations. He loved growing the business and steering it into new markets, networking with many small artisan family businesses as well as multinational suppliers. After many years of hard work invested, national economic pressures made the decision easy to close down the business before it was too late, but it lives on in his heart as the high standard of work he aims to output on a daily basis.

Alongside his daily work Gregor has spent most of his life surrounded by technology. He is at one with IT, specialising in web design and development, IT support and training, programming, coding, photography, stage lighting and sound, video production, IT hardware installation, maintenance and repair to name a few areas of expertise… he can even change the wee square battery in a smoke alarm at a push. Gregor relishes a challenge and will take on any uncharted hi‑tech projects with unmatched enthusiasm and a keen watchful eye.

A little about Gregor: